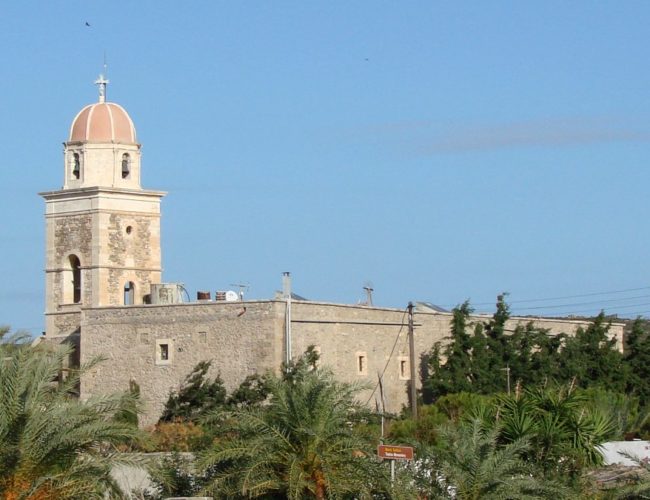 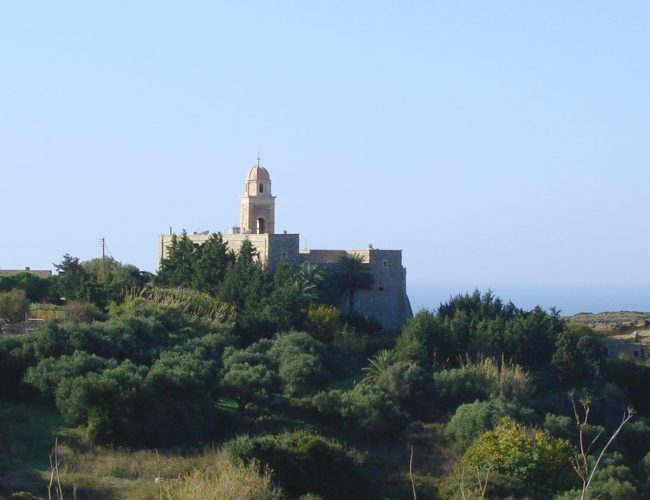 It is an historical monastery of the 15th century, which collapsed in the earthquake of 1612 and was rebuilt with the financial aid of the Venetians. During the Ottoman conquest of Crete, the monastery was destroyed and devastated by the Turks. In 1704 the monastery was declared stauropegion. During the Ottoman occupation there was a school in the monastery, while, after 1870, it was founded there a school of mutual teaching. The Monastery is a stauropegion fortress. The main building of 800 m2 has three floors, which are divided into cells, guest – houses, kitchens, the abbot’ s residence and warehouses. The katholicon is a two-aisled church; the northern aisle is dedicated to the Virgin, and the southern posterior aisle, to St John the Theologian. The monastery’ s characteristic bell tower bears relief crowns and crosses with inscriptions and the date 1558. In the Monastery, there is also an interesting Museum.

In splendid isolation on a windswept bluff, 15th-century Moni Toplou is one of the most historically significant monasteries in Crete whose defences were tested by everyone from pirates to crusading knights and the Turks. Its star attraction is the stunningly intricate Lord Thou Art Great icon by celebrated Cretan artist Ioannis Kornaros. Dozens of scenes from the Old and New Testaments are depicted here; look for Noah’s Ark, Jonah and the Whale and Moses parting the Red Sea.

The fact that Moni Toplou looks more like a fortress than a monastery stems from the necessity imposed by the dangers it faced at the time of its construction. The monks defended themselves with all the means at their disposal, including a heavy gate, cannons (the name Toplou is Turkish for ‘with a cannon’) and small holes for pouring boiling oil onto the heads of their attackers.

Moni Toplou has repeatedly been active in the cause of Cretan independence. Under the Turkish occupation, a secret school operated in the monastery, and its reputation for hiding rebels led to severe reprisals. During WWII, Abbot Silingakis was executed after sheltering resistance leaders operating an underground radio transmitter. A small exhibit in the museum recalls this period with rifles, helmets and a field telephone. The adjacent main room displays engravings.

Moni Toplou is about 18km east of Sitia. Buses can drop you off at the junction of the Sitia–Palekastro road from where it’s a 3km walk. 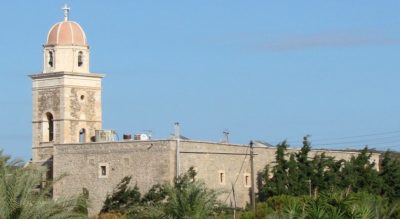 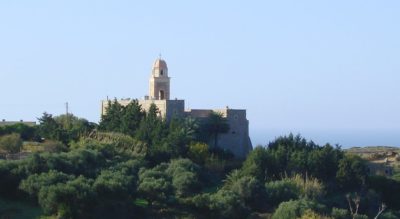